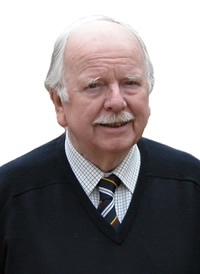 It is with great sadness that we learn of the passing of Graham Parker, at Wilton, near Salisbury in Wiltshire on Tuesday 8 March 2022, aged 89 years. Graham is survived by his beloved wife Rona, daughter Joanna, son Julian and their families.

Graham has made a most remarkable contribution to keeping alive the memory of those who served in The Great War. Over 20 members of Graham’s immediate and extended family served during the Great War of 1914-1918. Graham’s uncle, Corporal Thomas Parker, 2nd Battalion Royal Welsh Fusiliers. was killed in action during the last week of the Battle of the Somme in November 1916. Eleven young men in Rona’s Hackett family served in the British Army, four of whom are buried in France.

Graham served continuously with the British Army and Civil Service for 45 years. In 1978 Graham’s keen interest in the Great War developed whilst serving as a Lieutenant Colonel on the Staff at NATO Headquarters, Mons, Belgium.

Following on from his research into his uncle killed on the 1916 Somme battlefield, Graham was asked to organise and guide tours for the military history society at the NATO base. Initially his tours were organised for Service personnel and their families serving in Belgium and Germany. The demand for places on his tours grew by word of mouth and most weekends he was committed to taking a group to visit the Western Front. Since that time he guided several hundred tours to the 1914-1918 battlefields of Flanders and France for the general public, school groups, Veterans’ Associations, the Royal Military Academy Sandhurst, the National Defence College, Territorial Army units and the regular British Army. He was appointed OBE in 1979.

Graham has been a long-standing member of The Western Front Association (founded 1980)  and served on the National Committee for five years. From April 2008 to December 2020 Graham was a Vice-President.  Graham, often with Joanna (Honours degree in German), presented lectures to WFA branches on aspects of The Great War.

In July 1992 Graham arranged the purchase and presentation of six new bugles from the Royal Corps of Transport to the Last Post Committee to commemorate the 65th anniversary of the Menin Gate. He has also been an honorary member of The Friends of Talbot House (TOC H), with whom he has been closely associated for many years, assisting as a volunteer with the renovation of the house and garden in the mid 1980s.

Graham also advised on the Ypres Special Events Committee in the late 1980s and early 1990s. In 1991 he introduced The Poppy Parade and the dropping of poppy petals from the roof of the Menin Gate Memorial to the Missing at the annual Armistice Day commemorative service. Since then, the Poppy Parade has been an integral feature of the Armistice Day ceremonies in Ieper. 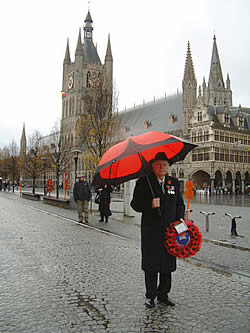 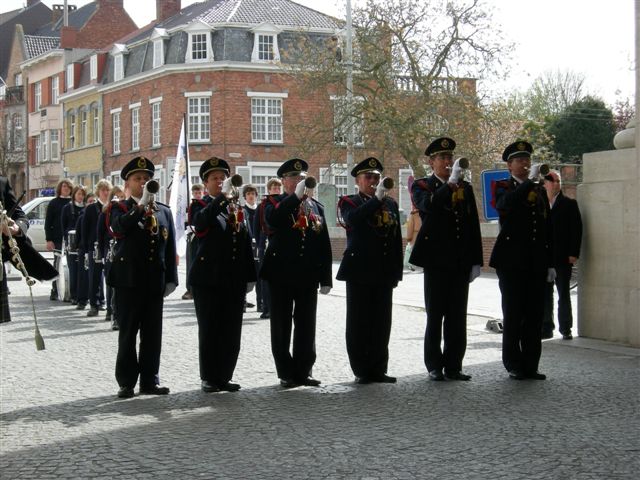 On 11 November 1995 Graham was leading the Armistice Day “Poppy Parade” commemorating the 80th anniversary of the battles of 1915 in the Ypres Salient. He was in advance of the main parade of bands, standard bearers and soldiers from St. George’s Memorial Church through the streets of Ieper to the morning ceremony at The Menin Gate Memorial to the Missing, when there was a sudden heavy rainstorm. On reaching the market square and the Cloth Hall Graham could see crowds of visitors and local people lining the road to the Menin Gate and the downpour resulted in umbrellas of all colours suddenly appearing along the route. The images of poppies on the old Flanders battlefield and the umbrellas lining the route on that wet Armistice Day in November 1995 were Graham’s inspiration for The Poppy Umbrella.

Having completed 32 years’ Regular Army Service Graham remained on the British Army Staff in Belgium for a further 12 years and on his retirement in 1995 Graham founded Rembrella Ltd. to develop The Poppy Umbrella. Graham’s daughter, Joanna, created the design of the single red poppy and in May 1998 the Poppy Umbrella was launched at the Chelsea Flower Show with all proceeds being passed to the Royal Hospital Chelsea. Since 2008, Rembrella has donated proceeds from on-line sales to the Help for Heroes charity caring for injured Servicemen and women and from 2013 to The Not Forgotten Association.

The Poppy Umbrella sales have helped generate funds for a number of ex-Service charities, military heritage organizations and centres of Remembrance for their work in the welfare, care and continuing Remembrance of serving and former Servicemen and women including The Royal Hospital Chelsea , The Royal British Legion, The National Memorial Arboretum, Staffordshire, In Flanders Fields Museum, Ypres, Thiepval Visitor Centre, Somme and the Families & Friends of the First Australian Imperial Force. 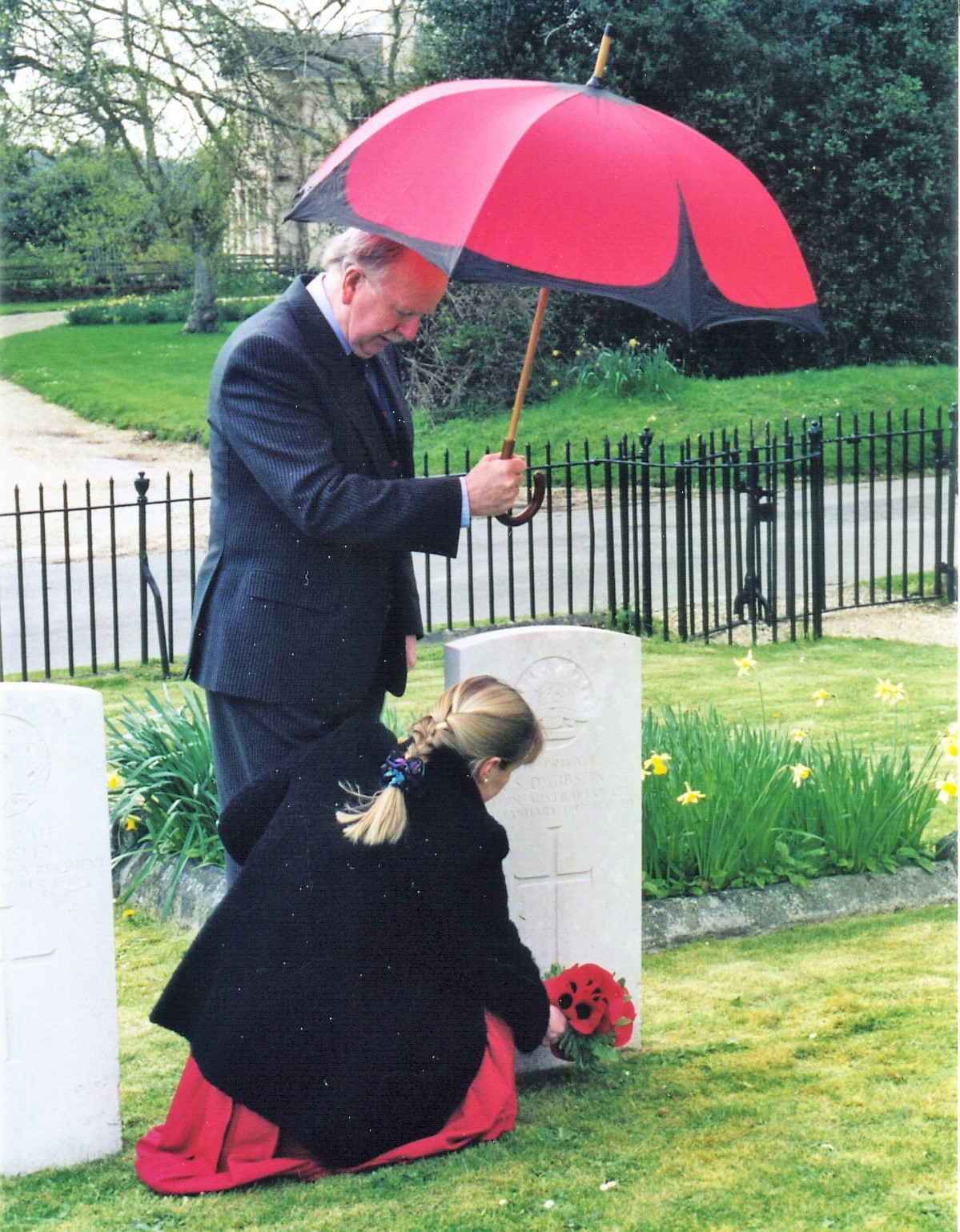 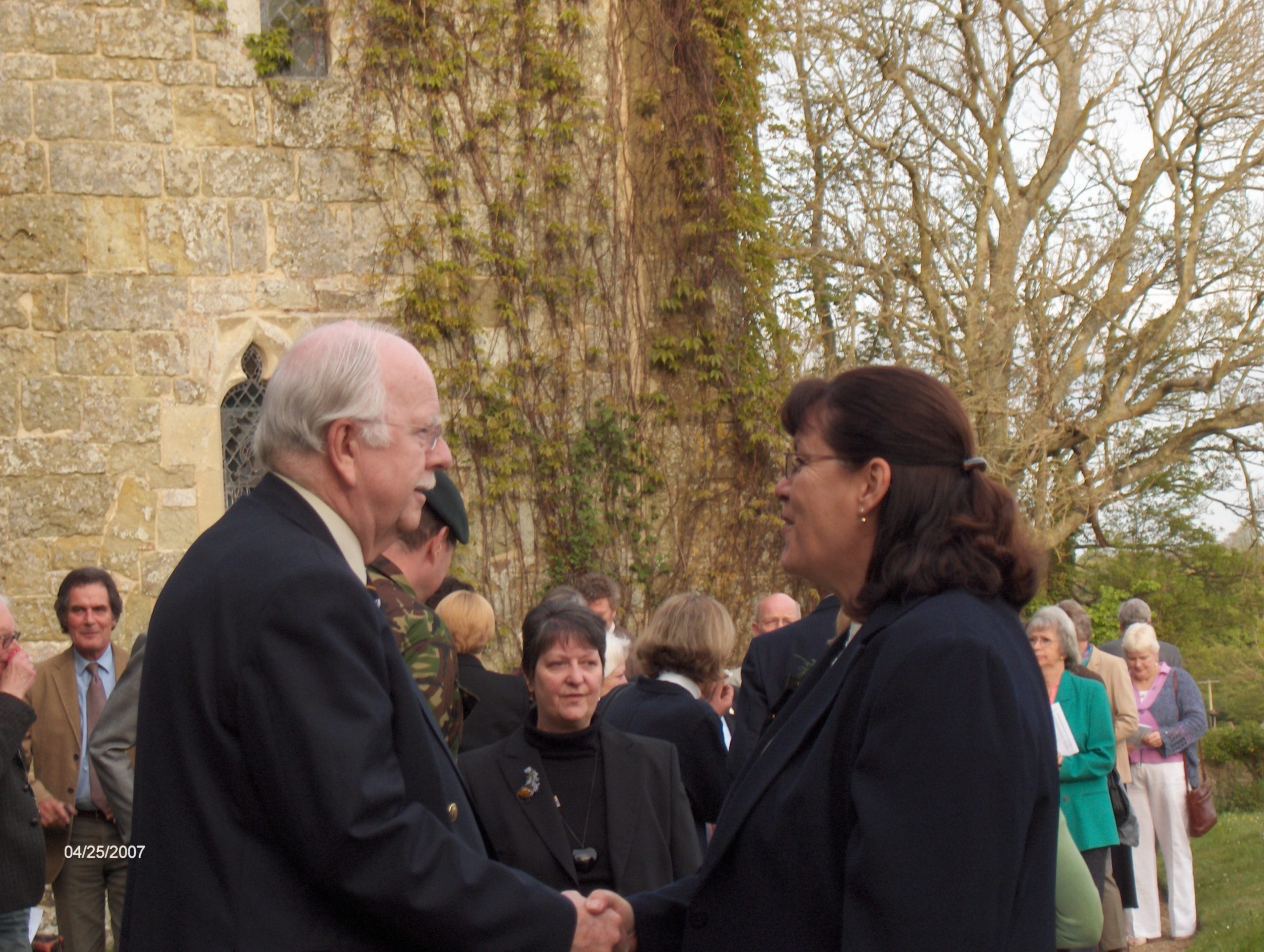 On ANZAC Day 2006, Graham and his wife Rona attended the inaugural ANZAC Service at St Editha’s Baverstock, Wiltshire, UK, where 29 Australian soldiers of the Great War are buried. Some years previously, a promotional photo of Col Parker and his daughter was taken at the grave of Private Andrew Gibson at St Edith’s Baverstock. The ANZAC Day services were initiated in 2006 by FFFAIF Members Jim and Chris Munro as Jim’s Great-Uncle, QMS Alan Andrews is one of those buried at St Edith’s. As a result of the close links between the Western Front Association (Graham as an Honorary Vice President) and the Families and Friends of the First Australian Imperial Force (FFFAIF Founder John Laffin was a key person in both associations) as well as the friendship and Baverstock connection, Graham offered for FFFAIF to be their Australian agent and the first consignment arrived in 2009. 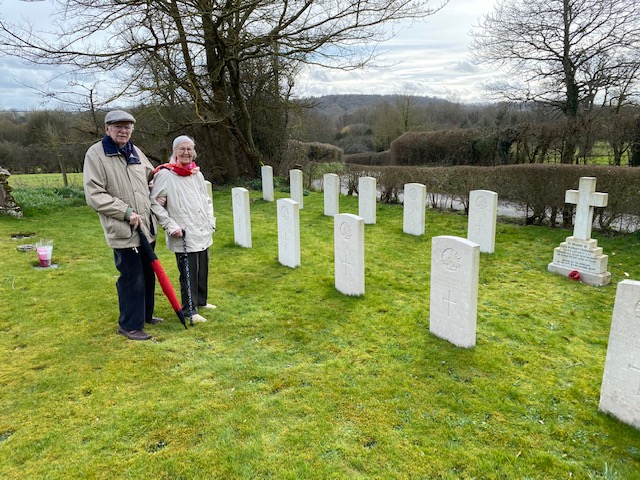 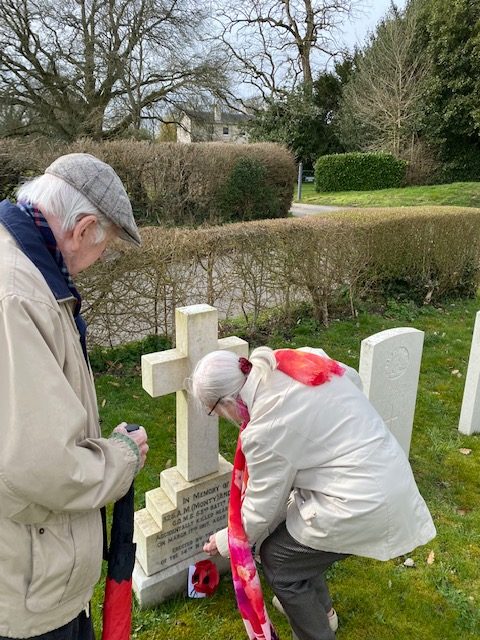 Graham his wife Rona paying their respects visiting Australian and British war graves at St Edith’s Baverstock and laying a tribute at the grave of QMS Alan Andrews in April 2021.

More than 4,000 Rembrella products have been sold in Australia by the Australian War Memorial in Canberra, the National ANZAC Centre in Albany, the Anzac Memorial Sydney, the Queensland ANZAC Day Commemorative Committee and The Shrine of Remembrance in Melbourne and by FFFAIF with sales benefiting these organisations and also contributing funding to Commemorations in Sydney for Fromelles Day and the Battles of 3rd Ypres as well towards the costs of headstones on unmarked graves of returned Diggers. 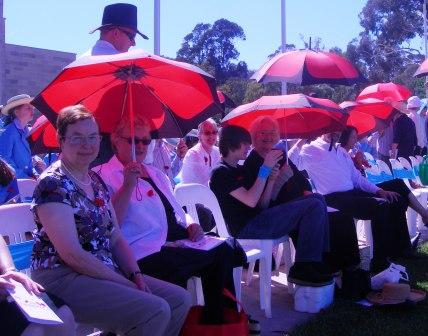 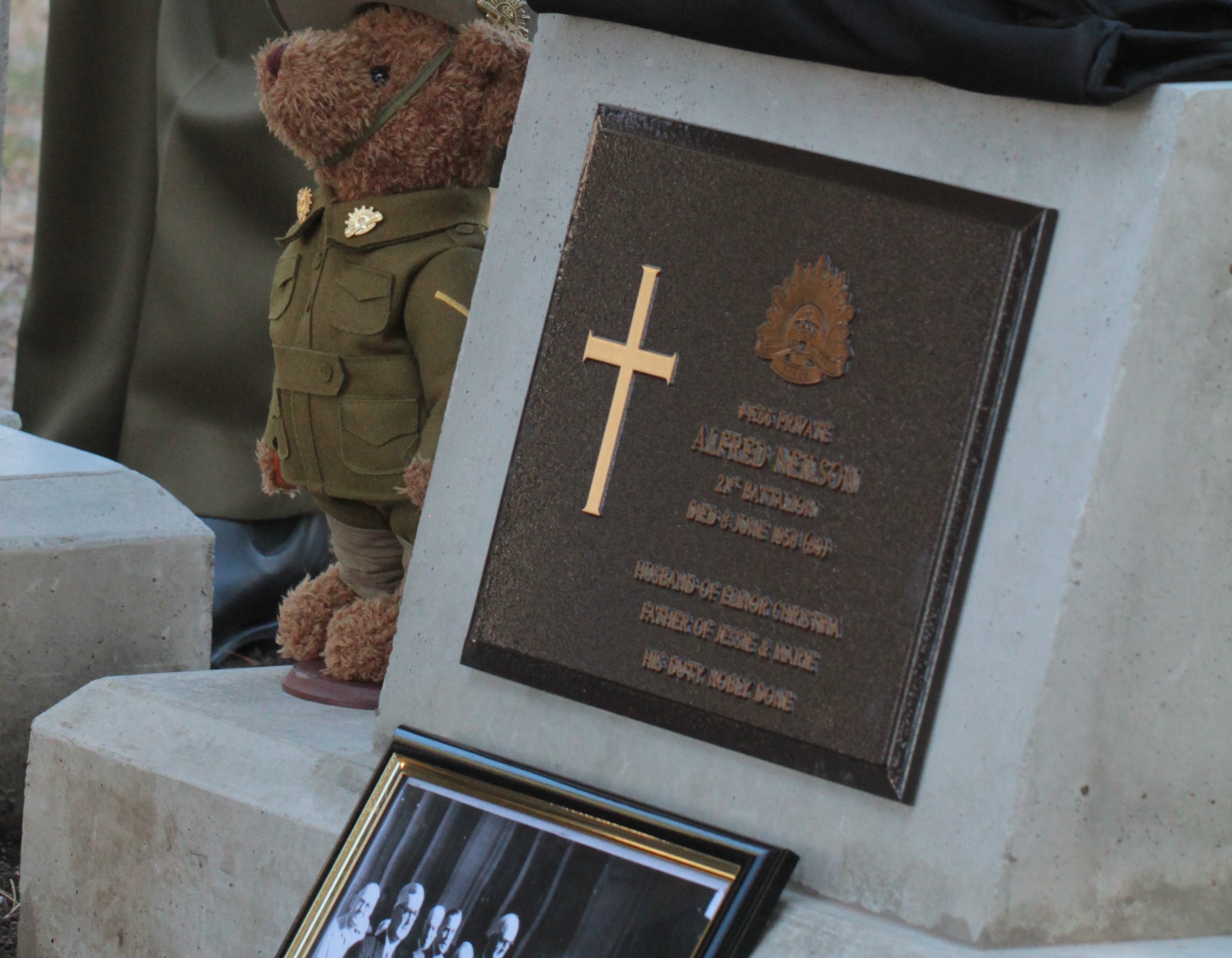 Graham, with Rona and his family, has contributed to thousands of people with an interest in the Great War having the opportunity to better understand its significance and impact upon their families and their own lives. His legacy lives on with the http://www.greatwar.co.uk/ website run by Joanna and her husband David containing a vast amount of information on The Great War while also being a tribute to the extended Parker-Degg, Hackett-Hodson and Pipe-Legg families. 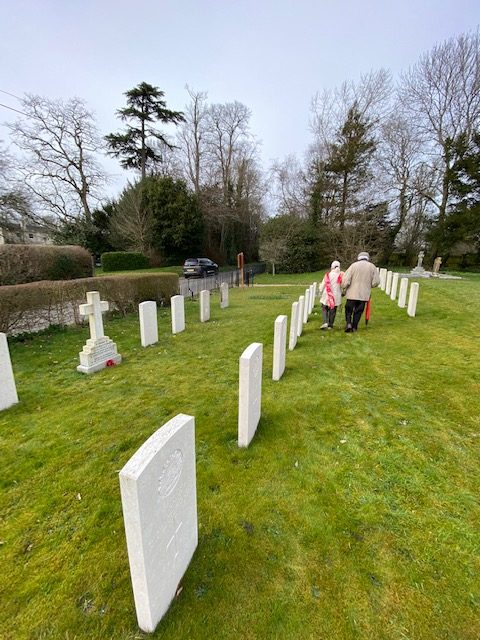 The Families and Friends of the First AIF honours the most remarkable contribution Graham has made to keeping alive the memory of those who served in The Great War and extends its condolences to Rona, Joanna, Julian and family at this sad time.

May he Rest in Peace
As we Keep The Memory Alive

This entry was posted in Rembrella Poppy Umbrellas. Bookmark the permalink.