Half of the Diggers from Pheasant Wood have been named. 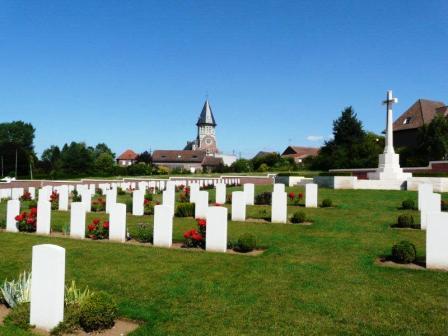 The graves of 124 of the 250 soldiers whose remains were recovered from the communal pits near Pheasant Wood, Fromelles in French Flanders and were reburied with full military honours in the new Fromelles (Pheasant Wood) Military Cemetery in 2010 are now identified with their names.  The names of another 98 Australian soldiers buried by the German Reserve Bavarian Infantry Regiment soldiers following the Battle of Fromelles on the night of 19th July, 1916 and continuing into the 20th are known, but identifying which soldier is in which grave remains the challenge that can only be solved now by matching the soldier’s DNA with that of a descendant. Of the remaining 1,111 Australian soldiers killed in the Battle of Fromelles with no known grave (1,333 Australian soldiers with no known grave less 222 known to have been buried near Pheasant Wood) , a further 28 soldiers are buried in the Cemetery, but their identity is not known.

The Fromelles Identification Board in April announced the names of 5 Australian soldiers who will have their names inscribed on individual headstones. The soldiers are:

The graves of these recently identified soldiers were re-dedicated with named headstones at the Fromelles (Pheasant Wood) Military Cemetery commemoration service on 19 July 2013.

Follow the link to see a list of the names of the 222 Australian soldiers known to be buried in the Fromelles (Pheasant Wood) Military Cemetery –Fromelles Extended Working List by Name .

This list is only the beginning of the story of these men who paid the ultimate sacrifice. Countless hours of research by dedicated volunteers has brought the stories behind these Diggers to life again. 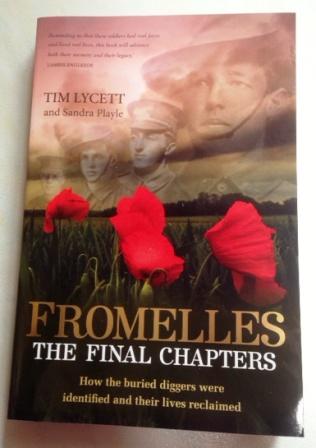 The book will be launched by two other members – Lambis Englezos AM, and Annette Tebb – in Melbourne on Saturday 27th July.

Anyone who believes that they are related to one of the Australian soldiers who are still missing from the Battle of Fromelles are asked to register their details with Unrecovered War Casualties – Army via the online registration tool at www.army.gov.au/uwca or by calling toll-free in Australia on 1800 019 090(9am to 5pm Monday to Friday) .

This entry was posted in Books, Diggers of First AIF, Fromelles. Bookmark the permalink.